During my years of hacking Final Fantasy XI, one of the things I do the most with it is offline static analysis. Live debugging does have its advantages to see how the data is being used live as well as debugging for various other information and aspects of the code, however offline analysis is also a huge part in what I do for finding new things, checking up on updated / changed bits of code and so on. However, because of this, we must first unprotect the game files.

Square Enix has protected their game files with a fairly simple protection method. All contents of the files .text section are “encrypted” and stored into a new section called POL1. This is more of a deterrent for newbies working on analyzing their game files I would assume, but this protection is so simple, it is not hard to undo. Given that there is no methods to hide what they are doing, everything is done in plain sight, it’s very easy to fix the file back to normal.

In this tutorial I will cover their protection, how it works, and how to unpack it. Included at the end of this tutorial is a link to a new project I have made called ‘xiunpack’ which demonstrates what I show in this post to automate the unpacking and fixing process.

To begin, we can open up the file in CFF Explorer and check out the sections of the file. Here is what the protection looks like:

Along with this, the files OEP is changed to point to a stub that unpacks the file when it is first loaded. Afterward, the file jumps back to the original OEP and continues its normal process after the unpacking has completed.

Here we can see what the stub looks like: 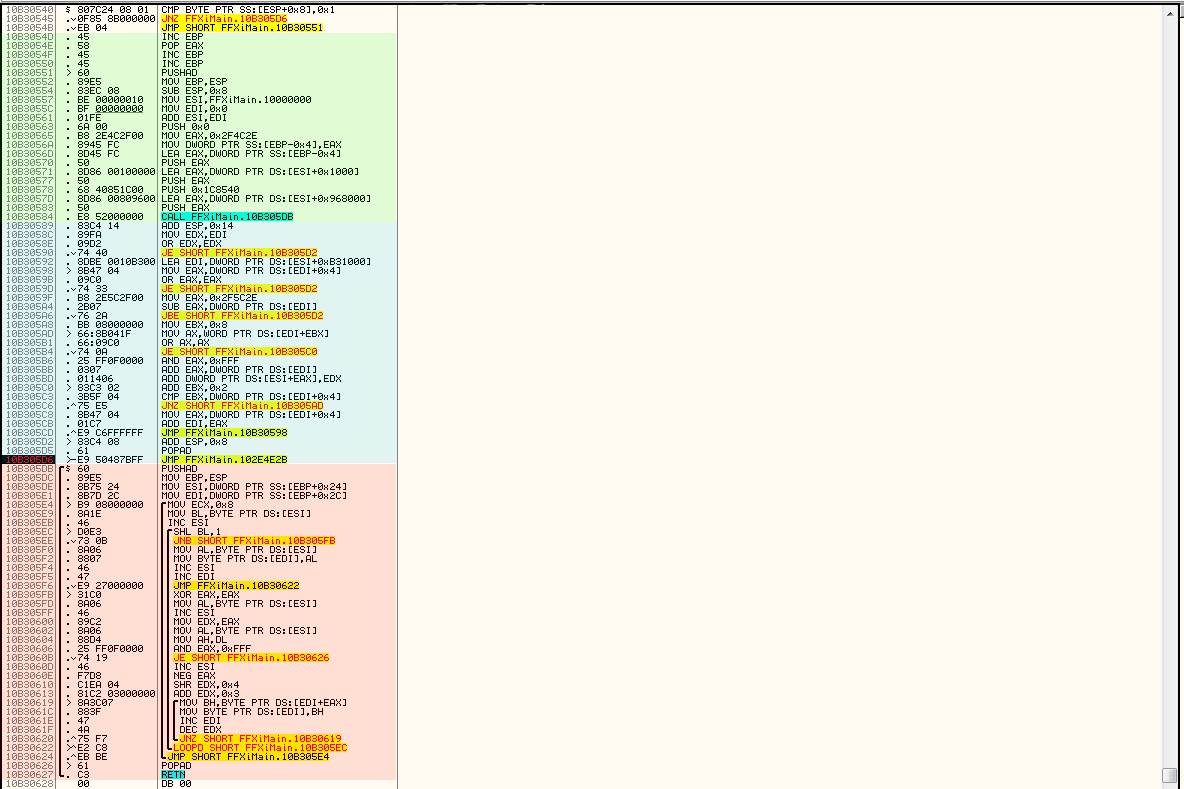 I have broken the new entry point stub into a few parts, so we can cover each of them individually.

So in the image above I have broken the new entry point stub into 3 parts. Lets cover each part in the following order:

The first section we will discuss is highlighted in green. This is the first part of the new stub that is executed. What this part does is prepares the unpacker section (in red) for unpacking the POL1 data into the .text section.

Here is a quick rundown of what the ASM is doing in this section.

From here we can see the following data:

At the end of the POL1 section you will see a block of memory separated from the data we are decoding. This is the stub entry to unpack the POL1 data.

Next, the unpacker routine is called. This is where the magic happens for unpacking the data from the POL1 section back into the .text section. To mimic this routine I just simply ripped it from the game file and created a simple .asm file (fixed up) to accomplish this task, like this:

I am not going to waste time on explaining each aspect of this part of the code, I’m sure by looking at it some can understand what is going on. There is simple simple byte shifting and such going on to rebuild the original data.

This is where the tricky part can come in. As I mentioned above in the green section, there is the possibility that the .reloc table can have some adjustments made as well. However, I have not seen this in any of the files I’ve unpacked. If I do come across it, I can make another tutorial explaining that information as well. However it is another simple packing routine which is again in plain sight inside of the blue section.

Here is a quick overview of this section:

The last jump in this section is our jump to the files original / real OEP inside of the .text section.

Now that we have all the information needed in order to unpack the POL1 section back into the .text section, and get to the original OEP we can safely unpack the file and rebuild it.

To start we must understand the PE file format. I am not going to go into detail about this because that is not the point of this tutorial. So if you are not familiar with the PE file format, I would recommend researching it. Some decent articles from the makers of the file type:

To rebuild the file we must do the following:

So to cover what my unpacker does in the order of operations, we have:

Once we are at this point, our new file should look something like this:

Keep in mind this will change based on the file you are unpacking, the version, etc. it will not match this image exactly because the size of the sections will differ between versions!

As you can see here, our .text section is now properly sized and aligned to the file. Along with that, all of the following sections are realigned into the file appropriately because the .text section raw data now exists. We set the raw data offset for each following section based on the previous sections raw size and raw address. So for example, the .rdata section’s raw address is based on the .text sections raw size and raw address (rawAddress + rawSize). And we do the same for each section afterward too.

As stated on the MSDN from Microsoft, ‘SizeOfRawData’ and ‘PointerToRawData’ MUST be section aligned. This is required to be a multiple of the files ‘FileAlignment’ value found within the NT headers optional header. This is not optional. In order for the PE to be considered valid and loadable these must be aligned. Aligning is very simple though. We simply round up to the nearest file alignment increment based on our sections info. Like this:

So for example, our .text section would look like this:

The last step is to obtain the real entry point to write to the file header so that when the file starts, we are at the real OEP instead of the packer OEP. In order to this we must recalculate the jump offset we saw in the blue section above at the end to match the proper file offset inside of the .text section. In my unpacker you will see the code for the OEP reconstruction like this:

This is reading the jump offset from the file on disk. So lets take a few things into consideration: (These values are based on my current FFXiMain.dll! They may differ for you!)

Now we have to adjust for the size of the code between the baseAddressOriginal and the baseAddressOffset. So if you look at the ASM image I posted above with the red, green and blue sections you can get a better understanding of what I am talking about here. From the very start of the code (CMP BYTE PTR SS:[ESP+0x8],0x1) to the jump to our OEP (JMP FFXiMain.102E4E2B) this is exactly 0x9B bytes. We need this range to properly calculate the new offset to the OEP.

So after we know these values we can do:

Since this unpacker stub is static between all the files that contain this POL1 section, we can safely hard-code the offset 0x9B into our packer. If not, we could easily obtain the value from the file through some simple signature scanning and calculations.

And that’s a wrap! Your file should be fully unpacked and able to be analyzed in a disassembler / debugger of your choice!

There is 1 last optional step that you can take from this point. You can fully remove the POL1 section from the file as it is no longer needed now. Just be sure to realign the sections that follow it, if any! Once that’s done it should help reduce the file size a bit more. The file should be runnable as-is, meaning you should be able to drop it in replacing the original with the unpacked version and use it with the game. However it may trigger the update required process in the client if you are playing on retail servers!

Hope this was helpful for some! :)

xiunpack was open source for a short while until certain people started stealing my work and putting their name on it. Due to this, I have decided to no longer share anything open source that deals with the FFXi community. If you are a research company or similar and wish to obtain a copy of the source, you can contact me at: atom0s [at] live [dot] com

As of recent (2019), I have build a Discord bot that sits inside of the Ashita Discord server whom will automate this process for anyone. He supports all files that contain a POL1 section that is made for FFXi. (He does currently have a whitelist for which files are supported to prevent abuse.)

You can join the Ashita Discord server here: https://discord.gg/Ashita

Update 08-25-2020
Added information regarding the Discord bot I wrote a for years back to automate this after taking the source code offline.