When I recreated my website last year, I had planned to try and keep up with posting at least on a monthly basis. I enjoy sharing my discoveries, work, hobbies, etc. as in some cases it can help teach others. However, the past year turned out to be absolutely insane and completely ruined that schedule.

It’s been just over a year since my last post, which I can hardly believe either since it still feels like only a few weeks ago I wrote some of the last posts. Time flies when life is going insane..

Here’s a bit of a recap of my past year or so.

Just before my last post, there was a wildfire pretty close to us.

Here’s a pic of that looking out our backyard towards it: 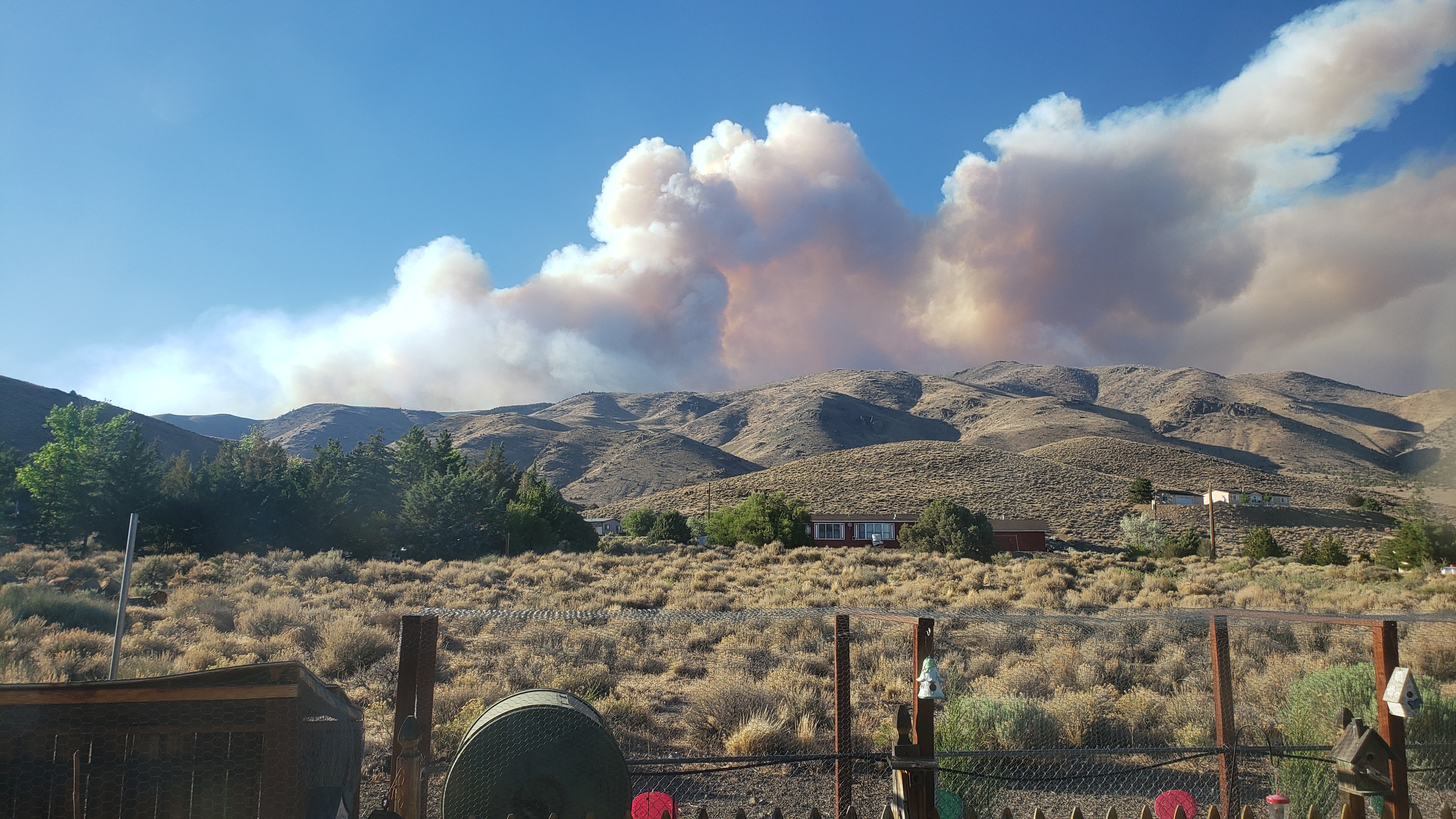 And then a few weeks later, another to the south of us: 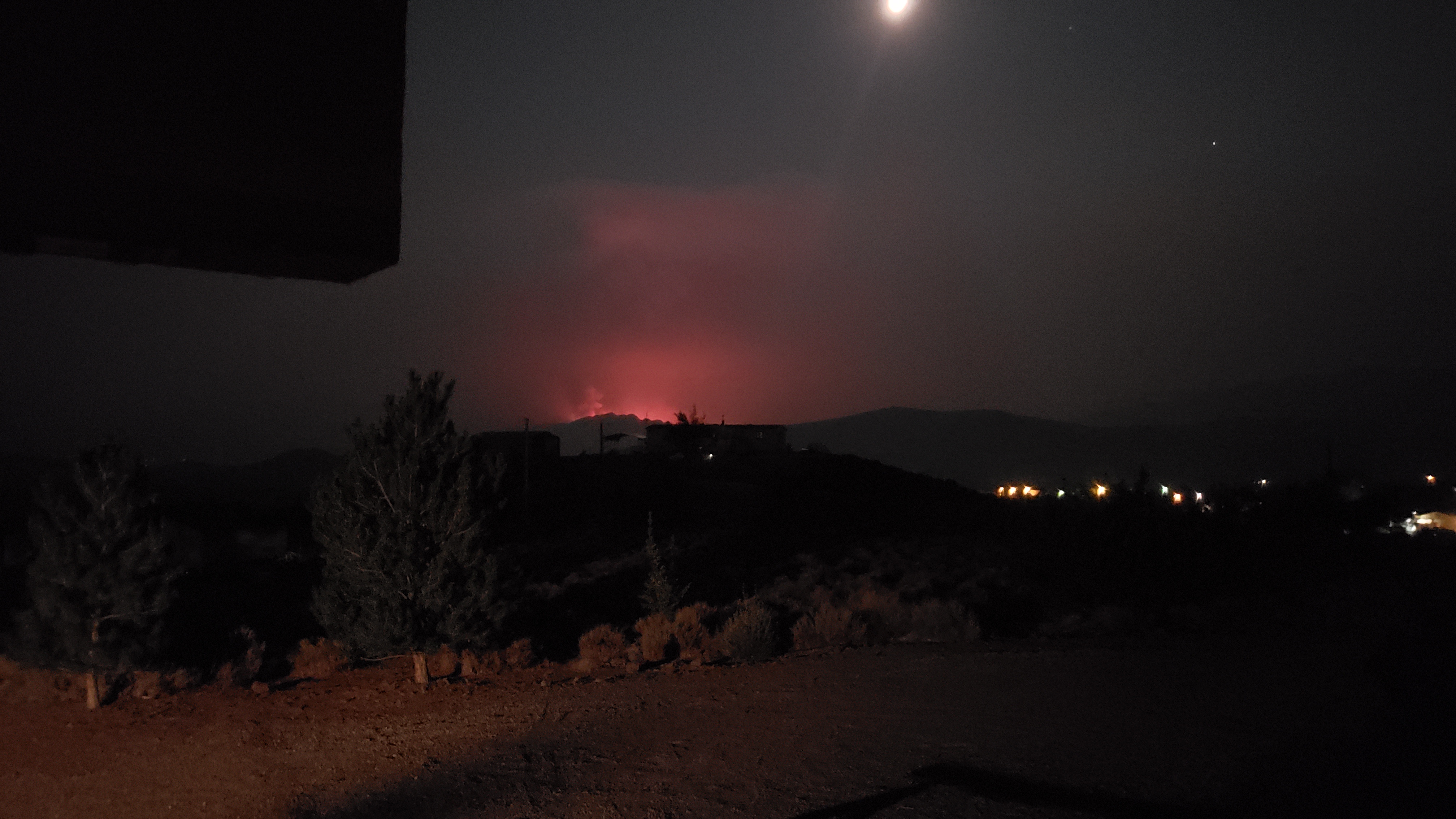 A second picture of this fire taken at our friends house who was right next to it: 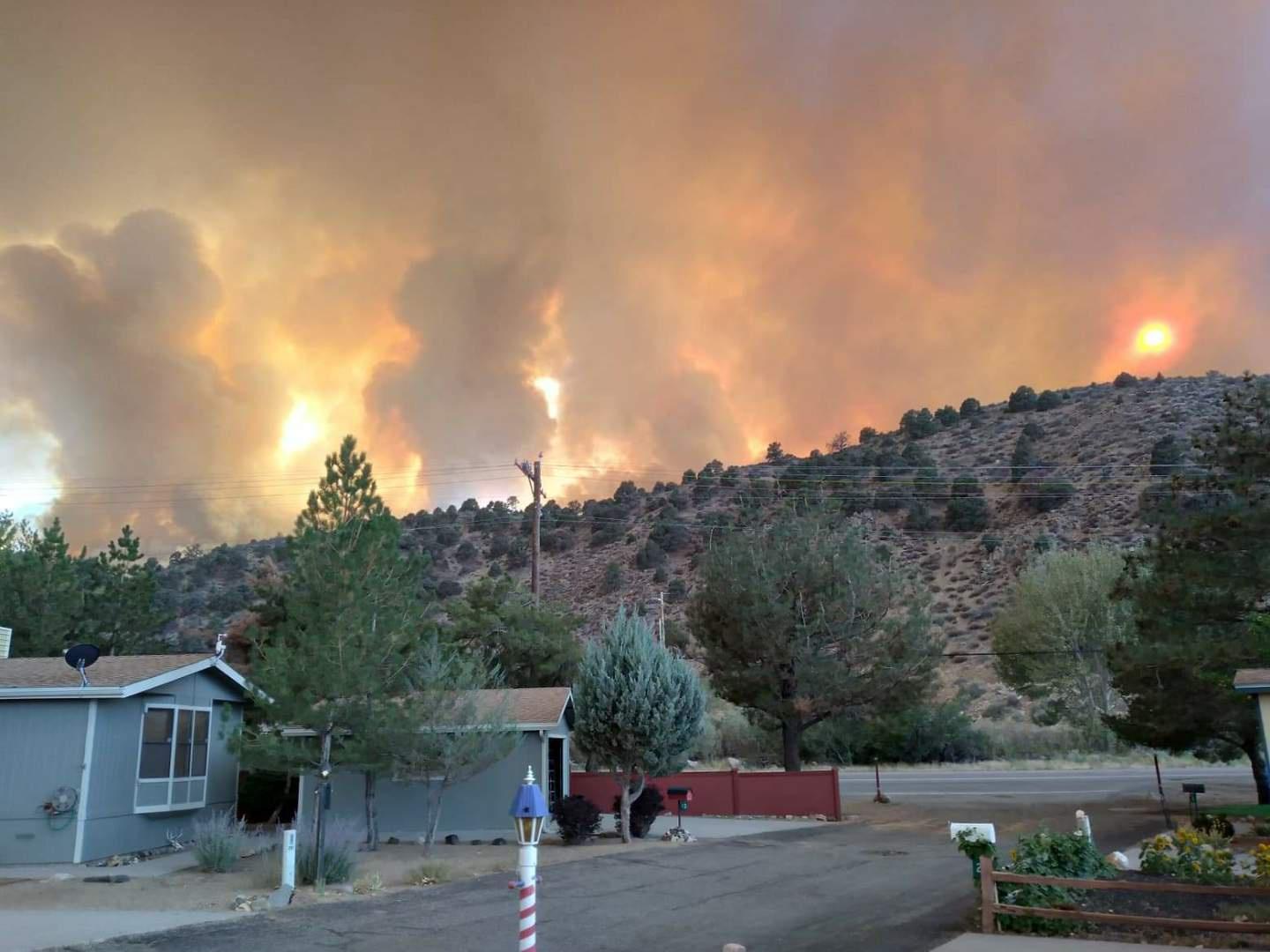 This fire landed up burning around 70,000 acres.

Between these two fires happening, our 13 year old Siberian Husky, Zoeey, passed away. She had started showing the signs of her age and internal organ issues but never showed signs of suffering. She started having issues walking and holding her urine, which we figured out was due to her kidneys and pancreas starting to slow down. She became diabetic and had to have insulin shots.

However, I landed up finding her collapsed in our mudroom unable to getup and walk. She was super weak and cold, panting and really out of it. I could tell that was going to be her last night here. I called my husband to come home and be with her because I knew she was going to land up passing.

She landed up passing about 10 minutes after he got home peacefully with us by her side.

About a month after the second fire above, our newest family member, Cocoa Bear (our Chocolate Pomeranian), fell ill. Out of no where, she went from being her normal hyper self to being really calm and quiet. We figured at first she was just not feeling well and just comforted her and took her to bed.

In the middle of the night she landed up vomiting an insane amount for a small dog which immediately concerned us. She kept throwing up afterward too most of the night. We landed up rushing her to the vet in the morning where she spent all day. They kept her on IV fluids but she couldn’t hold anything down and kept throwing everything up. The vet, after hours of holding her, gave her back to us with no answers and a bag of pills.

Not to go into all the details, but the vet basically expected her to die without telling us. We refused to give up and just go home so my husband (we’ll get to that later..) rushed her to the animal ER about an hour from us. They took her in and immediately knew something major was wrong and told us she did not look good.

Come to find out, she had a massive hernia and most of her intestines were herniated out. They rushed to get her stable because she was so weak from the night before of vomiting and no sleeping, so they were scared to take the risk of going to surgery with her until she got more stable. Over night, things did not progress better and she landed up getting worse, so they gave us the choice to keep waiting or risk surgery while she was weak. We decided to risk the surgery because it was already over 24hrs of her being like this.

She landed up losing 42 inches of intestine because it was herniated for too long and died. (According to her doctor, that was about 1/3 of her intestines.) She survived the surgery and was given a low chance of surviving due to the amount of time she was ill and how bad things were. I spent the next month on the floor in the living room with her keeping her company and not letting her run around.

After a week at the hospital, when she finally got home: 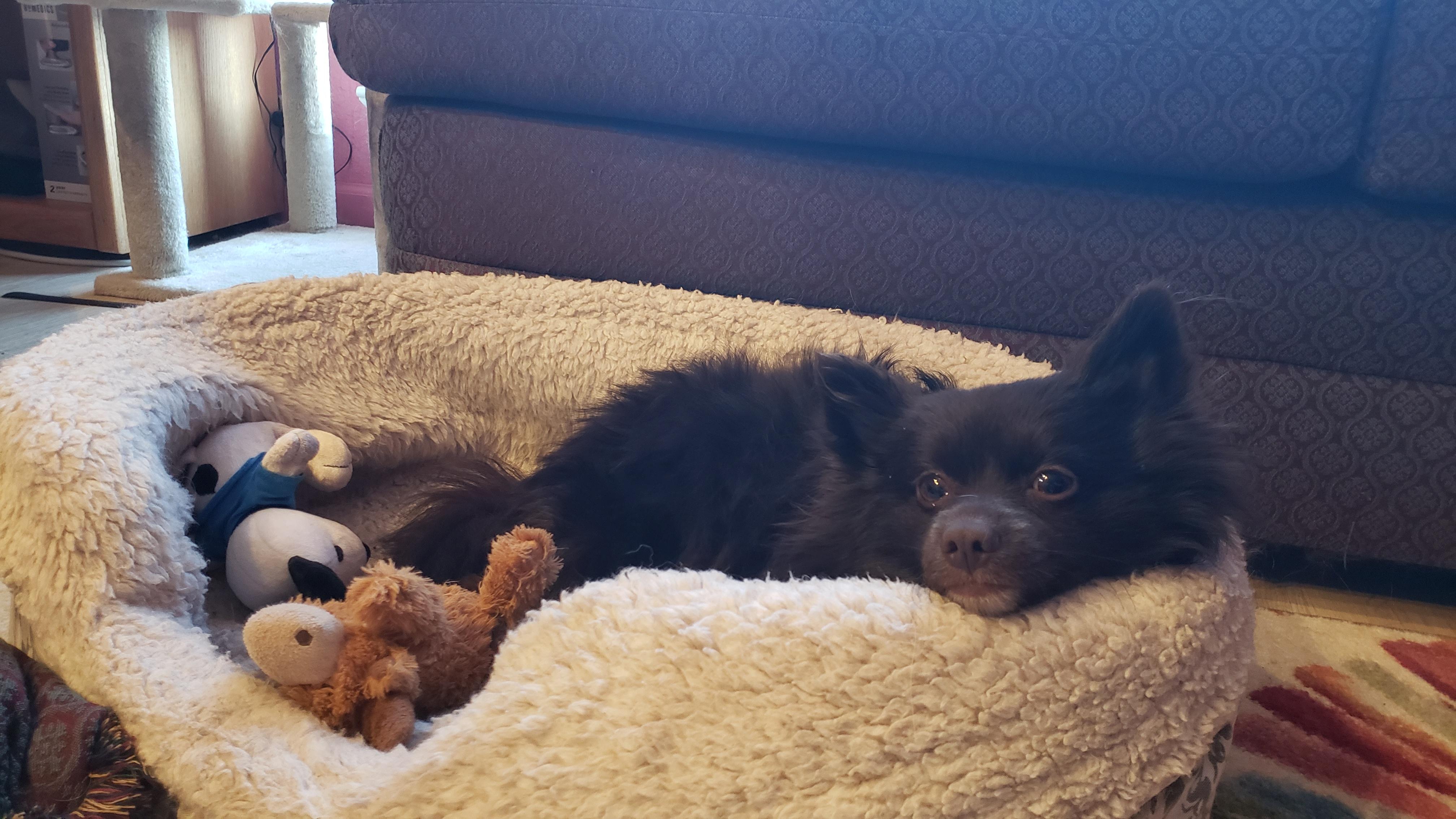 Hanging out with me on the floor for the following month to let her wounds heal: 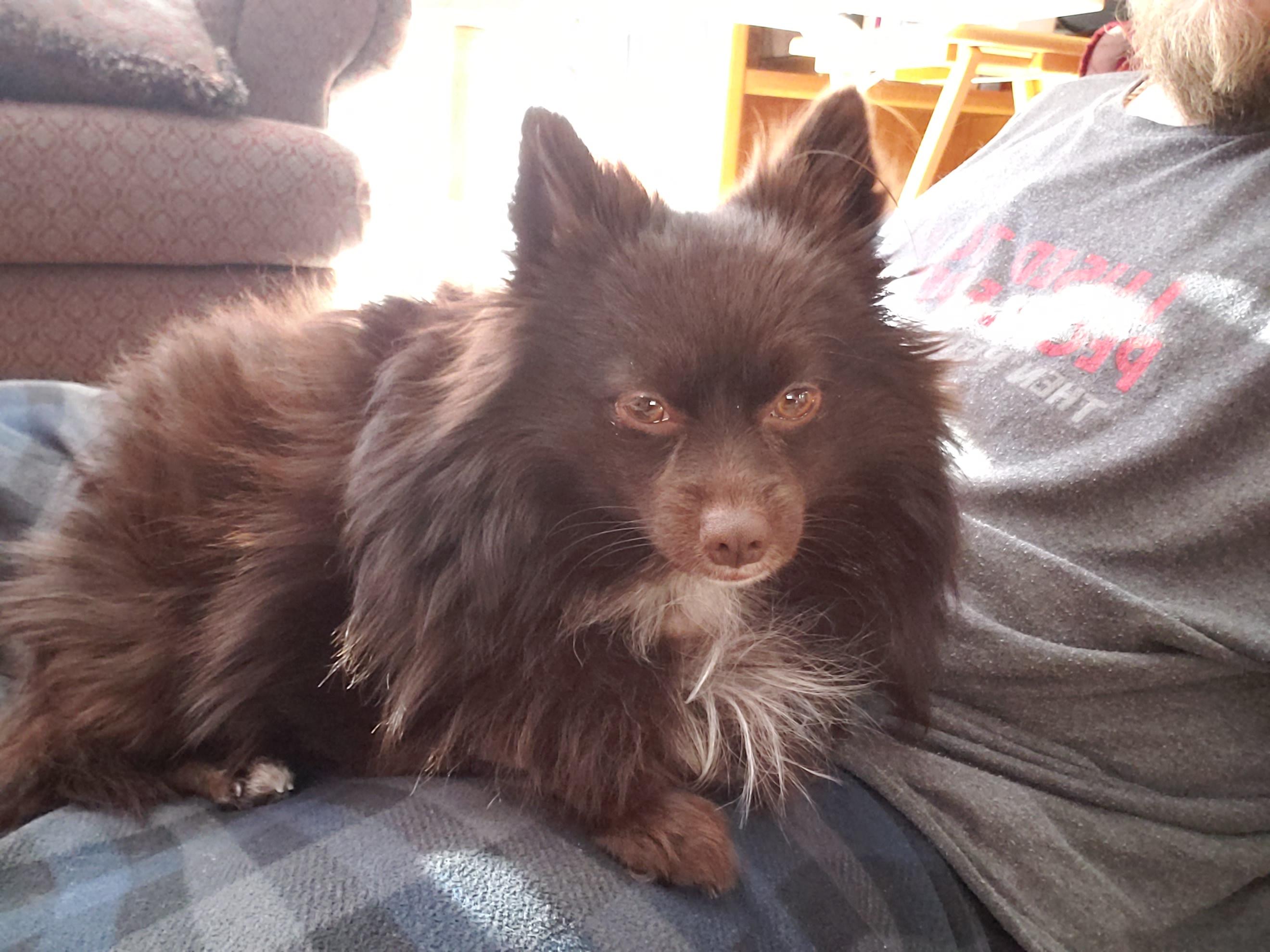 Today is actually the one year mark since her surgery too. Thankfully I can say she is doing great now like nothing ever happened. :)

During the downtime of the craziness, I was introduced to a new chat platform, Guilded. Basically, think Discord but with a team behind it that is actually listening to their user base.

While I haven’t really used it much since my report, I am excited to see what happens with the platform in the future once they start getting all expected and basic features finished. (It has tons of great features that Discord is now slowly starting to copy.)

During my few days trialing things out and checking out features, I discovered a vulnerability in their per-server web hosted pages setup. Without disclosing things too much, basically anyone could join a server and create a specific message that would be created into a page on the site that would cause their web engine to display the page to end users as if it were an official Guilded page.

That being said, you could link to a malicious file and make it seem like it was coming from an official staff member on their website.

I got a neat swag pack and mentioned on their security page. Prior to them being bought out by Roblox and moving disclosures to HackerOne:

Not too long after the above, we had a 6.0 earthquake hit about 15-20 miles south of us. So far that has been the largest I’ve felt and personally would rather not feel again. I’ll take a hurricane over an earthquake any day..

Around this time as well, my in-laws both got suck. (Thankfully not with Covid.) My mother in-law however, got pretty close to dying. She had 3 major surgeries within 2 weeks of each other and landed up in the hospital twice. In total she was there for about two months. The first stay, they attempted to fix an issue and made it worse, but because she was heavily on antibiotics, it was masked until she went home and got worse. When she went back, she got extremely sick and came close to dying due to going sepsis.

We spent most of that two months going to the hospital and spending time with her.

As soon as she got out, we also had another wildfire. This time, it was very very close to us.

Taken on the highway near our house:

The following were taken at my in-laws house since we were living there helping them out for a few weeks after they out back from the hospital. We also had to evacuate our house because it was in the direct path of the fire at the time.

This has been the closest fire since moving here for us. We had one other one a few years back that got close to the in-laws house, but this one was closer and worse.

During this time though we had packed both our own house and the in-laws house into 3 cars (stuff we wanted to keep and can’t replace in case the houses burned down). Was definitely a stressful few weeks waiting and hoping your house doesn’t burn down. Thankfully our houses were both safe.

Man.. something I never thought would happen in my life. But here we are. After spending 25 years of my life hiding, 8 years ago I came out of the closet and was finally able to say the words out loud, “I’m gay.”.

There’s so much more to my coming out, but this isn’t really the place for that right now, maybe I’ll get into that at a later date if people are interested.

Anyway, my partner and I met 8 years ago online. I had just gotten out of a horrible relationship and wasn’t really looking to get into another anytime soon. He sent me an automated message on the site that had a one-click send option with some various one-liners like “You’re handsome.” and such. I didn’t think much of it since I wasn’t really looking but he landed up responding to my message I left him later that night.

We clicked immediately and started talking casually. Our conversations landed up turning into 10-15 hour long skype/phone calls for multiple weeks and things just fell into place. But the biggest issue was that we were thousands of miles apart on the opposite sides of the country. After a few months, he decided to fly to come see me where I was living. And when he got here I surprised him with a ticket to fly back with him to spend more time together.

Fast forward 8 years later and I never flew back. We’re still together and just got married in August.

This past year has been absolutely insane, but, the last few months have been entirely worth it.

I hope to get back to posting things on here but time will tell how that will turn out. Things are starting to quiet down now at least. But I am still busy with some side projects before I can work on other things.