Steam In-House Streaming - How is this free?

A place to rant about something, give constructive criticism or otherwise soft-flamming. (Direct hate, extensive flamming or similar will be removed. Keep it friendly.)
Locked
1 post • Page 1 of 1

Steam In-House Streaming - How is this free?

Last night I bought Tom Clancy's The Division. After having several friends play it and tell me how the gameplay was, it sounded interested, being an MMOFPS type game. I felt that it would fill the time well when I get bored since my last endeavour, Diablo 3, has gone to total shit on PC. After an overnight 30gig download, I got to play it a bit this morning then again this evening.

My partner and I often relax in the living room together at night while he either plays the PS4 or watches TV and I'm usually on my laptop. I decided to copy over the install for the game from my desktop to my laptop. After about a 30min wifi transfer of the full install, I was pleasantly surprised my laptop fails to run the game because Lenovo is total shit at keeping drivers up to date for their products. (See here: viewtopic.php?f=2&t=90) After about 45mins of different config setting attempts I gave up and figured oh well can't play it out here in the living room.

Then I remembered about Steams In-Home Streaming. While I never used it and I had low expectations for it, I gave it a go.

Setup was a breeze, simply going into Steams settings and choosing 'In-House Streaming' on my desktop where the game would be played at, I set it as a host machine and my laptop immediately connected to it as a client: 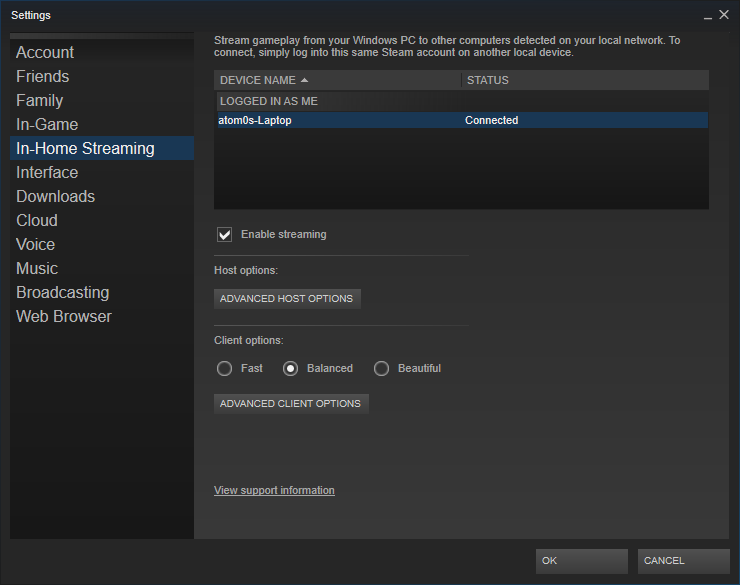 In the advanced hosting options I did set the 'Prioritize Network Traffic' option at the bottom given that my router is a newer-end model. I left everything else the same to give it a chance as-is then tweak later. On the laptop that I wanted to stream to, I adjusted the same settings to match the desktop.

From there, on the laptop I opened my Steam library and was greeted with a new dropdown button next to the 'Play' button for the game.

Clicking on this offers a new option to 'Stream from atom0s-Desktop'. Using this allows the desktop to run the game while streaming the output of the audio and video to the laptop. The laptop then creates a fake game window that accepts the incoming audio and video streams. The laptop also sends back input information from the keyboard/mouse to the desktop to use on the local game running.

To my surprise this worked 100% FLAWLESSLY. I was so amazed at how well it worked without any issue. My laptop is not hard-lined, it is wifi so there is a performance issue in terms of network speed vs. being hard-lined into the gigabit router like the desktop is. Either way, the graphics and game play were absolutely perfect on my laptop. With some minor tearing once in a while due to wifi performance, there was no issues playing the game at all.

How is this free? How is Steam not selling this as a premium service? This is insane how well it works and how well it plays. I can't believe how well it performs. Especially for being free of charge. This is a feature that I could absolutely recommend to others looking to play games on another machine in their house while having a beefy desktop that can handle it in general.

Steam In-Home Streaming has my absolute seal of approval and I could not recommend it enough for someone in a similar situation to mine.
Derp~
Need a great web host? Check out: AnHonestHost.com