Personal posts regarding my releases and research on various topics.
Locked
16 posts

Given that I am a moderator on Cheat Engine's forums, one of my duties is to keep the forums clean of various things. One of which is harmful files / trainers that could contain things that are harmful to the users that download and run them. When Cheat Engine 6.0 beta was first started and posted in the beta only section of the forum, I immediately updated my old trainer dumper tool from Cheat Engine 5.6 to work with the newest version of Cheat Engine.

This was a major overhaul to the popular tool with an entire rewrite of how the trainer files are handled from their original format. That said, I decided to just rewrite my tool specifically for Cheat Engine 6 and use a separate one for older files.

As of today, Cheat Engine is now at version 6.4 and through the 4 major revisions the sub-set of changes have altered the trainer files and their method of being saved numerous times. In total there are two major ways the files are saved based on the version of Cheat Engine being used to create them. There is also two ways a trainer can be saved and protected:
- As a stand-alone .exe file.
- As a compiled/protected .CETRAINER file that Cheat Engine understands how to read.

Each of these methods have their own ups and downs. Keep in mind though, Cheat Engine is open source so these protections are mainly just to deter newbies from editing credits and claiming they wrote something they didn't. So this post should not be seen as anything major or hard-core in terms of creating a dumping tool as the source is freely available.

Because of needing to check files often like I mentioned above, I wrote a tool to dump the trainer files easily.
A simple drag-and-drop interface can be used to dump any trainer file made with Cheat Engine that is not modded from the original protection setup. 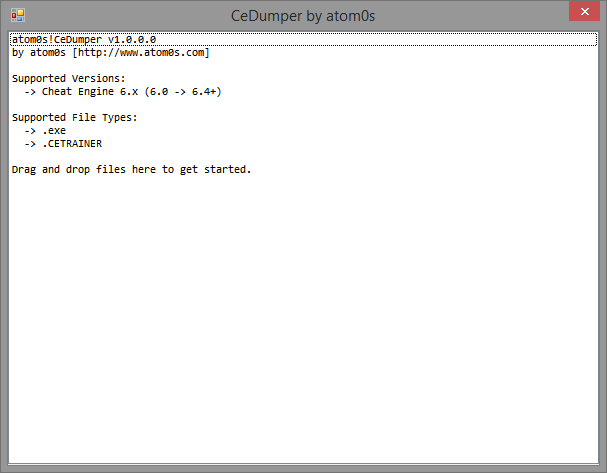 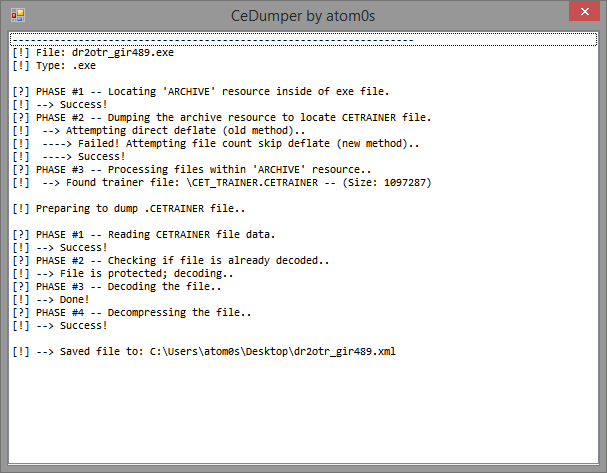 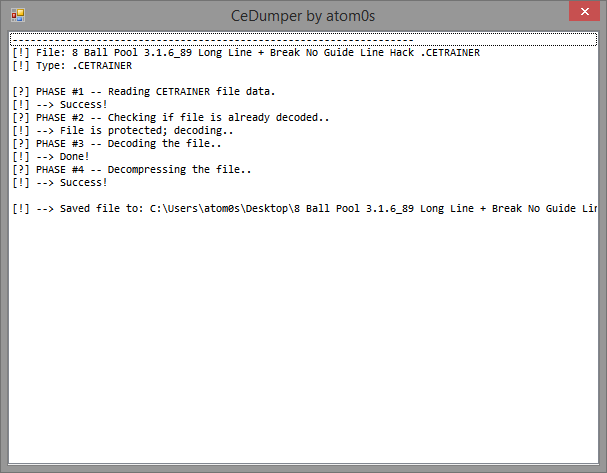 I will probably release this tool in the near future since others may find it useful to keep themselves protected against malicious trainer files from Cheat Engine.
Derp~
Need a great web host? Check out: AnHonestHost.com

The tool is not publicly released. If you have a personal trainer of your own that you need decompiled, I can assist you though.
Derp~
Need a great web host? Check out: AnHonestHost.com

That trainer is a .NET file packed with dotNetReactor.
Derp~
Need a great web host? Check out: AnHonestHost.com

you cant decompile the file?
Top

The file is not a CE trainer.
Derp~
Need a great web host? Check out: AnHonestHost.com

thanks, i am trying but i dont got all the codes
Top

mariopo3 wrote:thanks, i am trying but i dont got all the codes

The trainer is a .NET trainer (Vb.NET) packed with .NET Reactor.
I'm going to assume it's not yours either so I won't assist you in pirated someone else's work.

The unpacked trainer is also not a CE trainer, it is just a Vb.NET program so this has nothing to do with this topic.
Derp~
Need a great web host? Check out: AnHonestHost.com