Hi there, atom0s!
I saw no topic about your RE0 dll proxy on these forums, so I allowed myself to create one, hopefully that's not a problem

. I have a question about it if I may.
So I have a 5:4 aspect ratio monitor (1280:1024 native resolution) and RE0 doesn't support that properly at all, basically it is hardcoded for widescreen, so when I chose 4:3 mode in game, I get double letter-boxing:

For the longest time I thought it was impossible to fix, I tried to do so with d3d9.dll proxy back in the day and failed. Yet yesterday I decided to give it another go with the latest version and to my surprise It actually worked to a serious extend. Basically I tried to mess with [Patch_RenderResolution] and saw it actually had an effect on the output picture, so after an hour of trial and error I finally came to 720:400 resolution that provides the best result from them all (other results were mostly a complete mess), yet it still is not quite perfect. Basically what I got is this:

Double letter-boxing is gone, despite 720:400 resolution in d3d9proxy.ini the output picture doesn't look like an upscale, but is fair 1280:1024 (no idea how it all works), vertical alignment is perfect. The only problem is horizontal alignment. It is good for 4:3, but because my monitor is actually 5:4, 4:3 picture should be either stretched, either letter-boxed with tiny bars at the top and at the bottom to work properly, which is not the case here. What got sacrificed is right and left parts of the screen, if you compare two pictures above, you'll see the second one is in fact cut on the sides.
It is much more visible and more annoying when viewing in-game files: Notice how "t" in the word "Exit" is cut off.
Changing [Patch_RenderResolution] 720:400 by even one pixel to 720:399 doesn't do a slight change as one might expect, but instead radically modify output to this: 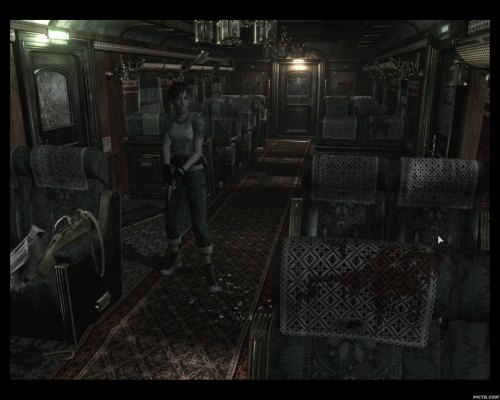 Which would not be completely bad if not for messing up layer alignments in menus: 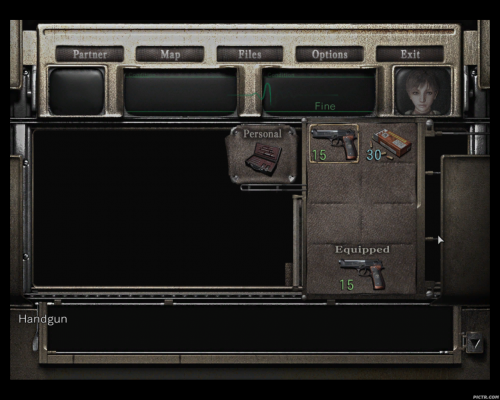 Notice how "Handgun" text is out of its proper texbox and how health status graph is also messed. On the other hand with 720:400 cut off sides resolution menu alignments are actually good across the board.

On the other hand, I've also tried [Patch_StretchRenderImage], which did the following:

Double letter-boxing is not back, nothing is cut off, menu layers alignment is all good, output resolution doesn't look upscaled even through the picture is obviously squeezed from the sides with redurand black boxes on the left and on the right. Can it be possible maybe to expand [Patch_StretchRenderImage] functionality to allow manual percentage stretching? I think something like "[Patch_StretchRenderImage] width = 90%" might fix my problem entirely without any further manual resolution editing if it is possible to code.

What you say, atom0s? Also in any case, thank you for your d3d9.dll proxy, even if not completely perfect, the way it is able to improve Capcom's original lazy port is already a huge step forward!
Top
Locked
1 post • Page 1 of 1