Yet Another Reason Grim Dawn Sucks

A place to rant about something, give constructive criticism or otherwise soft-flamming. (Direct hate, extensive flamming or similar will be removed. Keep it friendly.)
Locked
3 posts • Page 1 of 1

Yet Another Reason Grim Dawn Sucks

I was linked to a new thread on the Grim Dawn forums tonight in a joking manner talking about how Grim Dawn has basically fucked over early supporters.
You can see the thread here:
http://www.grimdawn.com/forums/showthread.php?t=35636

Basically, the jist of what's happening here is that anyone that backed the game during its early access, as well as kick starter times, was told they would receive a DRM-free copy of the game when it was ready. Meaning you would have both the version you currently bought and had access to, plus a DRM-free copy later. However, this is no longer the case now. Instead, you have to pick one or the other. If you want the DRM free copy and you do have valid access to it, you have to surrender your current Steam copy if you activated it.

I bought Grim Dawn during the early access backing time where I was told, via the site, that buying it would give me a Steam copy and a DRM copy of the game. Now that wording is magically gone from the site and this thread is saying otherwise.

But, that's the great part of the internet, things do not get lost or forgotten. Here you can find the original wording that many are referring to:
http://web.archive.org/web/201402080029 ... ynow01.php 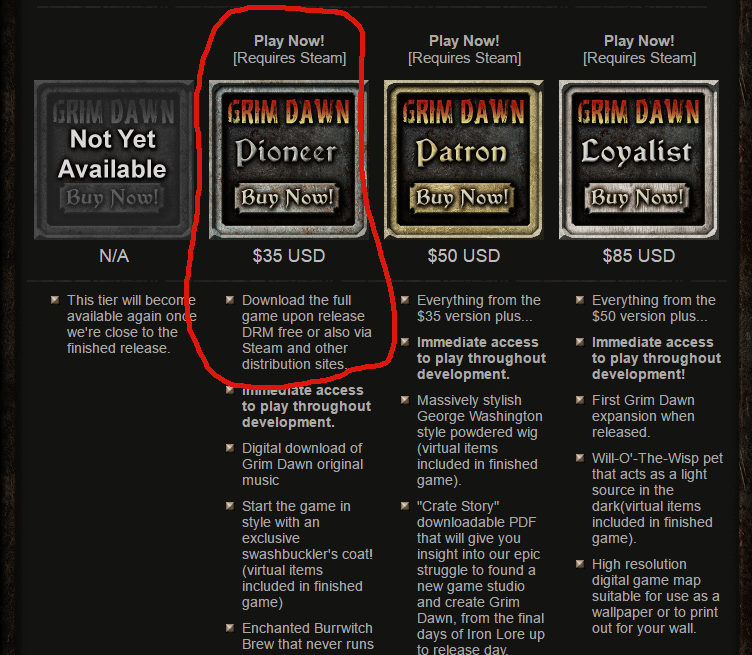 So I really do hope Grim Dawn gets pirated to hell and back now and makes close to nothing if they want to pull asshole moves like this on their backers.

Re: Yet Another Reason Grim Dawn Sucks

Another post showing proof that Steam+DRM copies were supposed to be supported on purchase: 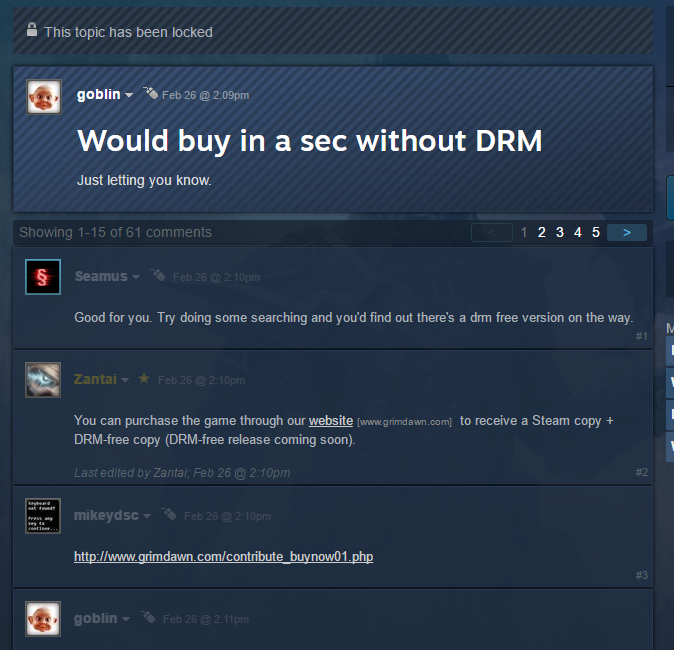 I'll probably be seeking a refund for fraud via Steam for my copy since I don't play the game and was screwed out of what I paid for.
Derp~
Need a great web host? Check out: AnHonestHost.com

Re: Yet Another Reason Grim Dawn Sucks

I noticed the changes from the very first one they canceled: Alpha Access for all backers. They changed to a Steam only access, which left those of us that know distribution registration is DRM out of the fray. Contacting them, they provided the first of many excuses. Their latest one, the DRM / third party registered distribution access was my own breaking point. It resolved itself with a refund of my monies and torrenting.

Users browsing this forum: No registered users and 0 guests